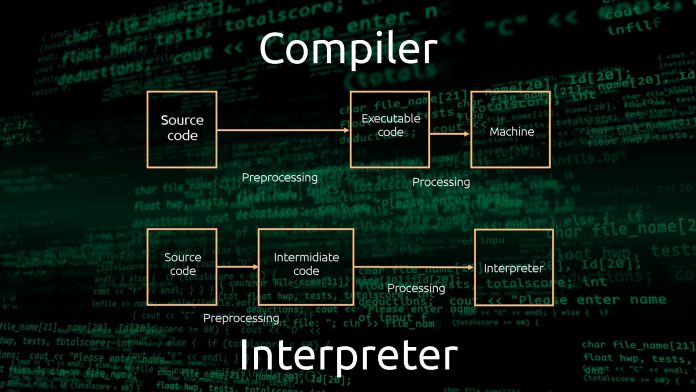 However, computers can only understand machine codes developed in binary systems. They do not understand high-level languages like humans. The computer program is always written in source code, which means a high language. These source codes need to be translated into machine codes for the computer to work. Here comes the compilers and interpreters to help you with this task.

This question might arise in the mind of non-programmers.

What is a compiler?

A compiler acts as a translator for a computer. The computer does not accept programming languages like JAVA, so it is essential to translate them into machine code. A computer’s processor only accepts machine codes, so a compiler comes to the rescue. It processes lines written in high language into machine language. It translates source statements written by a programmer. The programmers run the desired compiler on the specific file that has source code in it.

When the compiler is executing its task, it goes through many stages. It analyzes the statements written in the high language, and then it produces an output code. It later produces a final code, also known as object code. The object code is a machine code understood by the processor of a computer. The computer then carries out one instruction at a time.

Although a compiler takes a lot of time to analyze the source code, unlike an interpreter, the total time required for the execution of the process is much faster than an interpreter. Programming languages like C and C++ usually use compilers.

What is an interpreter?

Interpreters are software in a system that interprets a program. They are usually smaller than a compiler. They translate a programing language into an understandable language. Interpreters can read and carry out tasks of the programmer. They interpret the source code of complicated languages, scripts, and pre-compiled programs. But the interpreter is a slow translator, as it only interprets one line at a time.

If the programmer wants to execute the whole program at one time, then it will take time. However, it’s excellent while debugging if you want to check any particular line. It stops working immediately when it confronts the first error. This is because the lines are being interpreted one by one. Hence it makes debugging relatively easy and quick.

However, the interpreter is less preferred nowadays because it is slow in executing the object code. It cannot convert source code into object code. If you want to execute it later, then it will require a source code.

What are the differences between compiler and interpreter?

Let’s have a look at their differences side by side for better understanding. 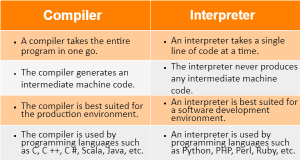 What are the steps of programming?

Compiler: As the program is created, the compiler will analyze all of the language statements. It will check the program for its correctness. This process is also known as parse. If it finds it incorrect then an error is showed immediately.

However, if no error is found then the compiler will convert the source code to machine code. It connects different code files into a runnable program known as exe. Then it finally Runs the Program.

Interpreter: It goes through a simple process, unlike a compiler. It simply creates the program without a need for linking files or generating machine code. Here the source language is executed line by line.

What are their advantages?

Compiler: The code execution time lesser for a compiler because the program code translated earlier into machine code.

Interpreter: It preferred by beginners because it’s simple to use the compiler.

Are there any disadvantages?

Compiler: Yes, there one major issue faced by programmers. They are unable to change the program without going back to the source code.

Interpreter: Here, you would require a corresponding interpreter where Interpreted programs can run on computers with a compiler.

Compiler: Yes, the machine codes saved on the disk as machine language.

Interpreter: No, it doesn’t save machine code.

What’s the comparison of their running time?

Compiler: It established on the language translation linking-loading model.

Interpreter: It established on the interpretation method.

What does the program generate?

Compiler: It generates an output program that can run without the original program—the file known as exe.

Interpreter: They do not generate an output program. The source program needs to evaluated at all times during execution.

How the program executed?

Compiler: The program execution takes place after the whole output program has compiled. It is not related to compilation.

Are there any memory requirements?

Compiler: As the specific program execute independently, it does not require the compiler in the memory.

Interpreter: The interpreter is always in the memory while interpretation is going on.

Who suits it best?

Compiler: Compilation is most preferred by programming languages like C and C++.

Does it require code optimization?

Compiler: They perform a lot of code optimization as they can see the whole code upfront.

Interpreter: They do not require code optimization as they see code line by line.

Where did it use it?

Compiler: It prefers in the production environment.

Interpreter: It prefers in the development environment.

Also read: How to get rid of spider mites.