It is the time to bring more excitement to science. Learn the new concepts and grab these conveniently. The process of learning concepts with the assistance of comparison is the ideal one. Let us view how diffusion differs from osmosis and vice versa:

However, diffusion is when the solute molecules reflect their movement from the zone of high concentration to the zone or area of low concentration. No matter how much pressure apply, the process of diffusion cannot avoid. 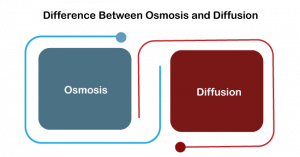 Osmosis is a process that cannot carry out in multiple mediums. It requires only the liquid medium for its execution. However, in the case of diffusion, there is no limitation of the medium. The diffusion process can occur in all the mediums, such as gas, liquid, and gas. Hence, diffusion is found to more versatile than osmosis.

It is a confusing point for a majority of the students. However, it is a significant question from an exam point of view. Hence, one must remember the direction of diffusion and osmosis. Osmosis is a process that occurs merely in one direction, and hence it is also known as unidirectional. While diffusion varies from this, it can occur quickly in all directions and does not limit its direction. The movement of the particles for the diffusion can see in any direction.

Speed: Difference between osmosis and diffusion

The speed of both of these processes varies from each other. Osmosis and diffusion do not process at the same speed. Indeed, one of these occurs at a much faster rate while the other one takes much time. Osmosis is a time-consuming process and takes much time to accomplish. It is papular as a slow process, while diffusion is found to be opposite to this one. Diffusion occurs faster and is hence accomplished quietly soon, and the particle starts moving throughout the medium without following any particular direction.